Read this article to know more about 7 Immortals in Hindu mythology! 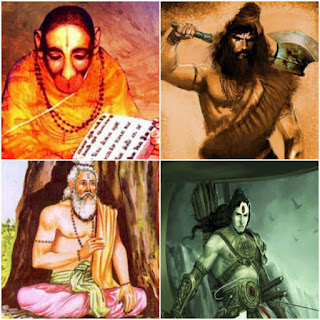 In Hinduism, it is believed that there are 7 main ‘Chiranjeevis’ (Chiram  – Eternal, Jeevis – Lived). It is said that these immortals are alive till the end of this ‘Kaliyuga’ on this earth. These 7 long lived personalities were born as a human beings. They were either blessed or cursed by Gods for long life. The legends, Ramayanaand Mahabharata also describe about these Chiranjeevis. Their names are also included in one of the shlokas and is being chanted by Hindus for success and long life. So, let us see who those great immortals in Hinduism are

Sage Vyasa was considered as the author of epic ‘Mahabharata’. He chose Lord Ganesha to be his transcriber as nobody in the cosmos had bravery to compose such gigantic task of writing ‘Mahabharata’. He was blessed by Lord Vishnu and Lord Ganesha. Sage Vyasa, a scholar, also divided Vedas, so he is called as Sage Ved Vyasa. It is said that he saw initial Kaliyuga phase. Thus, Sage Ved Vyasa is one of the main immortals in Hinduism.

Parshurama who symbolises excellence and strength, is the 6th incarnation (avtar) of Lord Vishnu. It is believed that he is the only Vishnu avtar who never dies. In some of the Mahabharata genre, he is mentioned as an ‘Angry Brahmin’. In old Puranas, it is written that he will reappear when the depraved powers with weapons will arrive on the earth. He will destroy those evil powers and save the mankind again. Hence, Parshurama is included in list of immortals in Hindu mythology.

Vibhishana was the brother of demon Ravana. He had joined Lord Rama and his army for the war against Ravana. After their win against Ravana, Lord Rama made Vibhishana the king of Lanka. Before leaving the earth, Lord Ram blessed Vibhishana with the immortal powers and ordered him to stay and serve people on the earth. Lord Rama also asked him to spread the Dharma. It is believed that his immortality is going to remain until the end of the Mahayuga (One cycle of the four Yugas). Thus, we have included Vibhishana in the list of immortals of Hinduism.

Mahabali, was Asura king, great grandson of Hiranyakashapu. He was blessed by Lord Vishnu during his Vamana avtar. It is believed that every year, on the occasion of Onam, Mahabali visits his people in Kerala from heaven. Mahabali, is thus among the immortals in Hinduism.

Kripacharya, was one of the royal teachers of princes in ‘Mahabharata’. He was Ashwathama’s maternal uncle. He was one of the Maharathis who fought with Kauravas against Pandavas in the war of Kurukshetra. He was blessed by Lord Krishna with the immortal powers.

Hanuman, an important character of ‘Ramayana’ is an intense devotee of Lord Rama. He is one of the Chiranjeevis, and he is also mentioned in one of the version of ‘Mahabharata’. Later versions explain him as an incarnation of Lord Shiva. It is said that, Hanuman requested to remain alive until people on the earth will worship Lord Rama. It is said that Sita blessed him with the boon which made him immortal and energetic. Hanuman represents the air, the atmosphere and thus the life for every living being on the earth. It is said that, as Hanuman is eternal (alive), he keeps attending Ram Katha wherever it is expressed in the country. There are some more Chiranjeevis like Sage Markandeya, Jambuvan, Maru, Devapi, Kak Bhusundi, Muchkunda etc.
You might be interested in:
There is no proof of the existence of these 7 immortals of Hinduism, but some people say that they have noticed their presence in temples and forests. However, people strongly believe Hanuman is still alive and stays in caves. Hinduculture has a special mantra which mentions name of all the seven Hindu immortals:
‘Ashwathaama Balirvyaaso Hanumanshcha
Vibhishanaha Krupascha Parshuramascha
Saptaitey Chiranjivinaha’