Goswami Tulsidasji Maharaj was a massive devotee of Lord Rama. He is acclaimed as an incarnation of saint Valmiki in this Kaliyuga. The sage Valmiki has authored original Ramayana in Sanskrit on the life of Lord Rama. Tulsidas rewrote the epic Ramayana in the vernacular Awadhi dialect of Hindi known as “Shriramcharitmanas“. He also compiled Hanuman Chalisa hymn dedicated to Lord Hanumana, the greatest devotee of Lord Rama. His astounding work has left an indelible mark on the minds of the apt religious Hindus. The depth of Goswamiji’s love for Lord Rama could be assessed from the following interesting story. 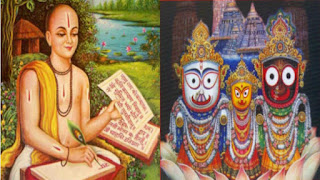 Someone apprised Goswami Tulsidas that, one could sight Lord in Jagannath Puri Goswamiji immediately decided to visit that place to get the sight of his precious God. After long, tedious tiring journey, he arrived in Jagannath Puri temple which was crowded with devotees. He entered the temple and viewed the idols. He was shocked and perplexed to see the idols without hands, feet and thought this could not be his mesmerizing Lord Rama. Deeply anguished, he came out of the temple and sat down the tree.
You might be interested in:
He was tired with hectic travel and was very hungry. At once, there was commotion, as a young boy, with offerings of food was inquiring about Tulsidas. Goswamiji thought that worshipers of Lord Jagannath might have come to know about his plight (hunger) and hence must have sent the plate full of food for his consumption. He summoned the boy. The boy told Tulsidas that Lord Jagannath had sent him the offerings. Tulsidasji declined and said he would not consume the food, prior to his own offering to his deity Lord Rama. The boy meekly told that it was sent by his Lord Himself. He referred to his anguish at idols without hand and feet and invited his attention to his own writing in ‘Shriramcharitmanas’ as mentioned below.
बिनु पद चलइ सुनइ बिनु काना l

The boy also explained to Tulsidas that Lord Hanuman guards the temple, Vibhishana visits the Lord Jagannath daily at this temple and invited Goswami Tulsidasji to visit next day early in the morning. The boy instantly disappeared from the scene. Tulsidas immediately realized the truth and was overpowerd by the devine emotions. He lost the senses in devotion and love for the God.

Goswami Tulsidas got up early in the morning with an urge to witness Lord and arrived at the temple. He sighted Lord Rama, Laxmana and Goddess Sita in place of Lord Jagannatha, Balbhadra and Subhadra. The Lord had fulfilled the wish of Goswami Tulsidas.  The place where Goswamiji stayed overnight is now famous as “Tulsidas Choura”